My First Adventure in the Arizona Desert

It’s February.  Usually this time of year I spend wishing I was riding, waiting for spring, waiting for the snow to melt. Stuck inside, fixing up my beautiful bike, dreaming of finer weather. 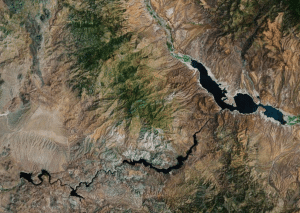 Not this February.  This February, I packed up everything I owned in my car (half of it being for my Suzuki), put my bike on a trailer, and headed down to Arizona.

Arizona has wonderful spring weather (80F/20C) now, and I’ve been dying to ride. But my first weekend was getting settled, my second weekend I ended up sick. I was also missing a riding partner. I found great friends in Bozeman, Montana; I explored the Bridger’s with Paul, I camped in the crazies with Benton.  I had amazing adventures in Montana.

Now it was Arizona’s turn.

It didn’t take me too long to find a rider here who fit my style. I was actually lucky, we have been in the same class for awhile, and had no idea we were both adventure riders. So many people in the US ride a Harley, and when you say motorcycle, they assume you ride a Harley as well. You do find dirt riders here and there, but even my roommates & friends who don’t ride think I do motocross. I don’t enjoy riding around in circles! 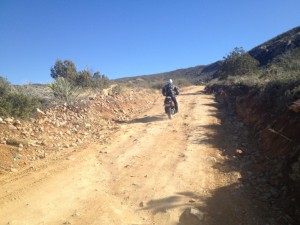 So when I met Mark and found out he had a BMW 650GS, I forced him to take me for a ride. Luckily he is just that nice of a guy.  He planned a trip, an hour away from my house, a half day adventure. My roommates (two retired ladies who didn’t think I would make it) made me feel a bit worried. But then I realised something… I’ve been to Albania, Kosovo, Montenegro and other countries. Much different than Arizona. I think I could handle it.

So on Saturday I woke up at 6:30, hopped on my prepped bike and started my journey to meet Mark at a gas station at the edge of town. I ended up being a little late (I’m still misjudging the traffic of this gigantic city), and while he was waiting he met two other riders headed to the same area as us. Roosevelt Lake. So off we headed, the four of us.  There was a little highway, but it wasn’t long before we reached the recreational area. 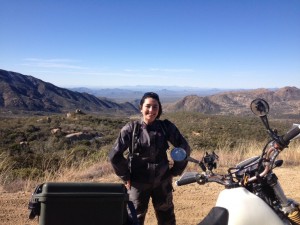 I must say, I was surprised at how many people were on the road.  There were tons of people on quads and bikes.  We stopped at the parking lot (yes, this area had a parking lot!) to take off some layers, and our gas station friends went off ahead.  When we started off finally, we quickly got caught behind a group of quads and some other weird four wheeled machine.  I have to say, it was fun passing them and getting away from the people!  There is a certain aggressive skill needed to pass quickly and without harm to either party. I enjoyed it, but was happy when they were in my side  mirror.

Soon, we had pure open road.  It was a beautiful day, the sun was shining but not too hot, and we made our way on an easy off road trail through the mountains. 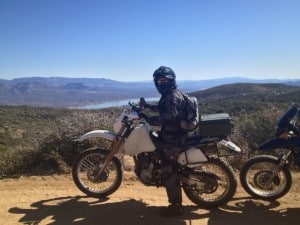 I, of course, had to stop multiple times for photos.  When you realize that there are not many places in the world like Arizona, you start to appreciate its beauty.  The trail on the way up was fun, simple, and open.  Single tracks make me nervous that I’m going to hit a tree, so I slow down. This road, I just had to look out for cars (YES, CARS!) around the bend. Otherwise, I could go full force. I am thankful for my time in Sweden and learning to hit those open roads with full throttle!

As we started to climb the mountain, I noticed little white patches. Snow! Wow, there is snow in Arizona! We made our way up, we saw more and more on the side of the road, but none on the road itself. 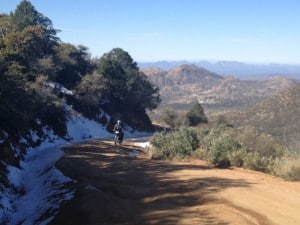 Near the top, we ran into our gas station buddies.  One was on a Suzuki DRZ and the other on a BMW 800GS.  The GS had a little tip over on the turn. I thought they wanted me to pull over to see the fantastic view. It wasn’t until I got to the viewing spot did I see the GS.  Luckily it was easy for them to get up (I didn’t even have a chance to get off my bike to help!)

Once we were settled, and took a few pictures, we talked to our gas station friends about the trail.

“Be careful!” the Suzuki rider warned.  “There is a sheet of ice on the road. You will need to walk the bikes through to get passed, it is just way too slippery.”  At that point, after the tip over, they decided to go back down. 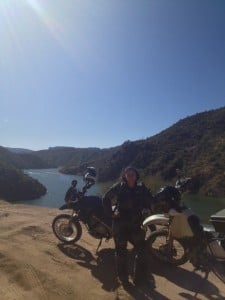 I looked at Mark. “You want to give it a shot?” he asked.

“You do realize I lived in Sweden. And Bozeman, Montana.  Riding in snow is not an issue.”  So off we went.

When we got to the “sheet of ice on the road” I had to laugh. It was barely ice, broken up pieces, and mostly mud.  This is the snow that Phoenicians are afraid of?  Bring it on.

We made it to the top of the summit, passing a lot of snow-mud along the way.  I did loose my back end a few times, because I was applying the brakes.  The key with ice and snow is no extra throttle, no braking.  Just keep at your current speed and you will pass it without a problem.

So glad I had experienced winter in Sweden and Bozeman to know how to ride in snow! This was child’s play. Yet it was still fun 🙂 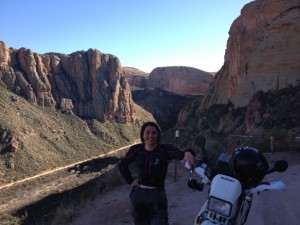 Riding downhill is a lot scarier for me than riding up. Also, this was my first ride of the season, and I was out of shape! I could feel myself not having confidence in the curves, but I gave myself a break. Easing back into riding after being out for months takes time.

When I reached the bottom, I noticed Mark talking to another rider. Another Suzuki DRZ. Mark actually happen to know this guy, Larry.  Small world! And he happened to be waiting for our gas station buddies who decided to turn around.

I have to say, I was very proud of myself because I hadn’t yet had a tip over, fumble or fall.  I had a loose back wheel here and there, but I managed to keep control. Until I pulled up near the guys, and lost my footing. Doh! Bike down again!

I was so mad that I didn’t reach my goal of not tipping that I picked up my DR in an instant. Because if she isn’t down for 10 seconds long then it doesn’t count, right? Mark and Larry didn’t even have a chance to get off their bikes to help me. So some of my pride was saved 🙂 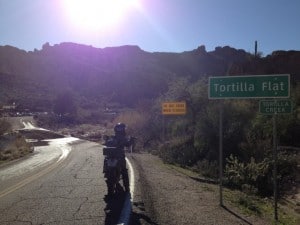 We headed to lunch, at a little dive at a gas station by Roosevelt lake.  We ordered greasy food, drank some ice tea, and talked about riding adventures. It was a blast!

It was now around 1.  The day was done, and it was time to head home. Larry was camping by the lake, but both Mark and I needed to get back into town.

Larry suggested we take the Apache trail. Another fun dirt road, and it would get us where we needed to go .  It was on the way to his camping ground. I had nothing else planned that evening except for a party later. I looked at Mark. Game. Continue our adventure we would! 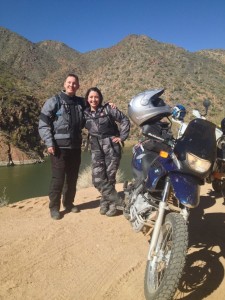 This trail was beautiful and followed the river. But I started to feel the heat of the desert. It was hot, dusty, and I didn’t yet own sun screen (still don’t).  The beauty of the desert, the river, the cacti, was worth every second. While there were people around here and there, mostly cars and RVs we had to pass, it was beautiful. I see why that road was so popular.

Another few hours of dirt riding, and then back to pavement. But beautiful twist and turns (I really have to practice my turns) made it entertaining.  There was even a water stream we shouldn’t have passed. I tend to ignore signs though 🙂

In the end, it was an amazing day and an amazing introduction to the Arizona desert.  Even with all the cars and people, I couldn’t imagine it any better.

It is amazing the people you meet who do dual sport. Cheers to new friends and many more dirty motorcycle adventures!