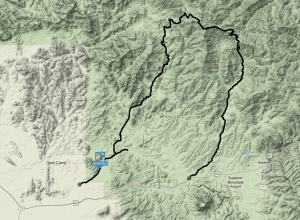 It was about a month ago I left cold Montana to head to warm and sunny Phoenix, Arizona.  I never considered the mountain ranges or the riding possibilities here in Phoenix.  I knew that there was some great riding here, but I had no idea how great.

Not only that, but I had no clue what amazing riding friends I would find.  Riding buddies that actually were all about the dual sport (even more so than me, with my measly little Suzuki DR350 that can barely do freeway).

So far I’ve been out 3 weekends (only my first ride in Arizona recorded so far), and every single one has been a completely blast. 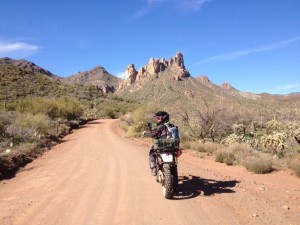 This past weekend Mark (who took me on my first ride in the desert) took me to the Montana Mountain Loop.  Maybe he thought I was a bit homesick for Montana (I’m not). Maybe he just knew what a freaking amazing route it was. I vote for the latter.

Coming from the center of Phoenix, it took about an hour to get to the dirt roads. But once we were there, we were completely surrounded by desert, cacti, and the beauty of Arizona.

It was a beautiful day, in the 80s (20s C), and so warm that I was able to take off my jacket and just ride in my armour. Starting out, the road was not rough. It was nice dirt, and we stopped many times just to take in the beautiful scenery.  As we started to climb up the mountain, the terrain got a little harder. But it was nothing that I couldn’t handle or hadn’t seen before. 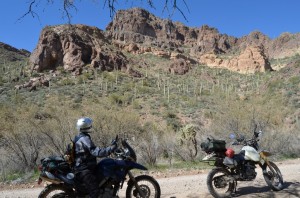 As we made our way down the side of the mountain, where the sun did not shine as hard and there was still snow on the ground, the road seemed much rougher.

We had gotten a late start and now the sun was going down. Less time for pictures and drooling over the view than on the way up. With the downhill and the rocks, and my throttle getting stuck on “GO”, it was a rough road. 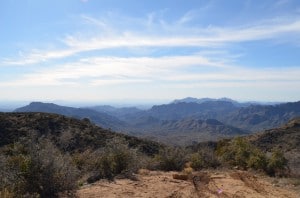 The turns were the killer ones.  There were huge rocks, and a cliff you did not want to go off of.  I was taking many of them too fast, and I started falling left and right.  Luckily Mark was quick to jump off his bike and help me up.  He helped me slow down on the turns to experience less falls, and I was impressed by his calmness.

But with each fall, I became more and more tired. There was very little time to rest, so it was back on and continue.  I’ve been stuck riding in the dark before, and it is not a fun task. I wasn’t about to let it happen again.

One fall the bike landed on my foot. Thank goodness for my Alpinestar off road riding boots, because my ankle would have been snapped for sure. Instead, it was left throbbing and even four days later it hurts and is black and blue. But you know what? That is all part of the adventure!

Onward we went, and once we were off of the mountain, the trail eased up.  We road in some amazing river beds and even some rivers filled with water that seemed to be part of the road, which reminded me again of Albania, my first true off road adventure.

We made it back to base camp just as it was turning dark. It was another amazing adventure in the Arizona desert.  I look forward to the many more that will come in the future.